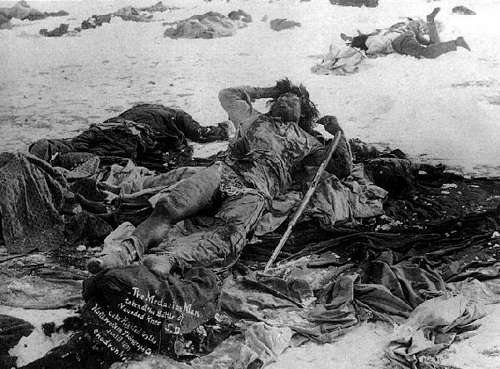 From Wikipedia, the free encyclopedia

Determining how many people died in these massacres overall is difficult. In the book The Wild Frontier: Atrocities during the American-Indian War from Jamestown Colony to Wounded Knee, amateur historian William M. Osborn sought to tally every recorded atrocity in the area that would eventually become the continental United States, from first contact (1511) to the closing of the frontier (1890), and determined that 7,193 people died from atrocities perpetrated by whites, and 9,156 people died from atrocities perpetrated by Native Americans. Osborn defines an atrocity as the murder, torture, or mutilation of civilians, the wounded, and prisoners. Different definitions would obviously produce different totals.[1]

This is a listing of some of the events reported then or referred to now as "Indian massacres":