THE LIQUIDATION OF GEORGE WALLACE 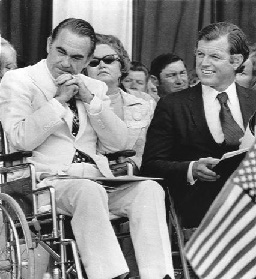 PERMANENTLY CRIPPLED IN THE ASSASSINATION ATTEMPT

WALLACE SURVIVED. LATER, WALLACE CHANGED FROM TO AN INTEGRATIONIST

GEORGE WALLACE, Governor of Alabama, Presidential Candidate, who was nearly assassinated at the height of his leadership. The hit took place during a rally, and the perpetrator was killed on the spot. This event changed the entire scenario of the election year. It was one of many assassinations which changed America forever, robbing from the voters their right to make the final choice from a full slate of candidates. The assassin was 21 year old Arthur Bremer whose background suspiciously fits the typical CIA MK-Ultra profile as he had written a rare diary outlining his motivation in a nation where almost all assassins have diaries and almost no other American ever seems to. Bremer was sentenced to 53 years, was forgiven by Governor Wallace and his family, and released early as a model prisoner. He is living in an unknown place and can never go near political candidates as a part of his early release.

Governor Wallace explained his conversion to integration by citing the devotion of his black caregiver whose professionalism and honest candor demonstrated to him that blacks like this were people of high ethics who are worthy of the utmost respect and equal ranking with whites. Black Congresswoman Shirley Chisholm regularly visited Wallace during his years of paralysis, saying she was a believer in God and that visiting the sick was her responsibility as a Christian, no matter what their background. In Wallace's final term as Governor of Alabama, he appointed more blacks to high levels of government than any other Governor of Alabama had ever done. His transformation was complete. As Governor, Wallace placed the crown on the head of the first black Homecoming Queen of the University of Alabama on national television, telling her with his gracious and honest smile and with total Southern gentility that she was a very beautiful young woman and how proud he was to crown her the Homecoming Queen.

GEORGE WALLACE
ONE OF THE FINEST LEADERS OF THE SEGREGATIONIST SOUTHERN LEADERSHIP
SHOT DOWN AT THE HEIGHT OF HIS CAREER AND LEFT PERMANENTLY PARALYZED
WALLACE EVENTUALLY REPENTED HIS SEGREGATIONIST VIEW & ASKED BLACKS TO FORGIVE HIM
THEY DID.